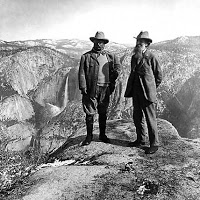 Wonderfully illustrated with sketches from nature. Mostly aimed at the person who will sketch the observations, though writing is incorporated. Free form, to include newspaper clippings, feathers leaves and other materials found in the wild. Includes drawing exercises, breaking down parts of an insect or household pets, acorns, birds, flowers and trees, landscapes. Section on teaching nature journal writing to groups of all ages and in particular, children. Resources include bibliography, national wildlife and nature organizations, brief survey of early nature journalists. Suggested assessments for teachers using the book in class.

Being in the World:An Environmental Reader for Writers

“Most people are ‘on’ the world, not in it–have no conscious sympathy or relationship to anything about them–undiffused, separate, and rigidly alone like marbles of polished stone, touching but separate.”

A comprehensive anthology for use in the environmental education setting. Natural history literature.

Intended, the authors writer “for students on beginning composition courses and advanced workshops in literary nonfiction, offering opportunities to experiment with a wide range of rhetorical modes. For English, Environmental studies students. Chapters broken into topics such as: Encounters with the Otherness, Fedcundity and Mortality, Nearby Nature, Walking: On the Trail and Off, Climbing: Mountain Narratives

Index of rhetorical contents: analysis and interpretation; argument and persuasion;cause and effect;

Geographic coverage offers: two narratives in the far North, a handful in the Great Plains, and surprisingly few from the Northeast, Pacific Northwest, and about a dozen from the South, most examples are set in American Southwest and California. The international section has 11 pieces. The authors describe it as a “medium sized reader with 83 selections and general introduction to environmental writing, chapter introductions, biographical and critical head notes, points for analyzing and discussing the text, writing assignments drawing on the readings.” Target audience is clearly in a classroom setting. Style is pedantic and format physically cumbersome which would not appeal to the individual writer-reader. A glossary of critical terms is included.

Beyond Ecophobia, Reclaiming the Heart in Nature Education

A monograph of 45 pages including a reading list for children and references.

Text explains how to introduce children to nature and the environment at various ages, building on foundation of empathy, exploration and social action. Audience, K-6 teachers and parents

The Art of Science Writing

A selection of excerpts from literature with exercises and a script for a workshop leader, writing exercises, idea selection, topic evaluation, research, drafts, peer critique, revision and publication. Useful for science teachers who want to develop student facility with composition and nature writing. Middle and secondary school teachers interested in developing student writing in science and math can use this text.

124 pages including bibliography of the participants

Edited record of four public dialogues held with nature writers and activists at the University of Utah in 1988.

Quotes from the book: On Method —

“My field notes begin as random observations not consciously linked by a preconceived theme. At that moment, I don’t try to write essay fragments for later polishing. When I am spending a lot of time in the field, it limits my imagination if I record only material related to one theme or intent. But some things intrigue me more than others, and they gather momentum. So most of my field notes aren’t done explicitly for essay writing later on; they’re just general habit.” Gary Paul Nabhan, p. 84

“Taking field notes is a very Beta activity. You’re concentrating, you’re up front, you’re exceedingly aware of the world around you. But there is an Alpha state that you can shift into, a kind of super-sentience. And after you’ve done enough of the discipline of field notes, it often happens that you kind of sit back and let all that peripheral stuff filter in. You’ve been seeing the details, the plants, the animals, the one-two-threes. But you always know there are other things in the air, and when you tune in to them you have moments of tremendous receptivity when time expands. But when these times come about, you need to write them right then and there. In my field notes there will be very terse entries, bing, bing, bing, bing, and then there will be paragraphs. I mean real sentences, with periods, beginnings, and ends. Almost ninety per cent of the time these paragraphs translate directly into text with just a little cleaning up of syntax-neatening it up and cutting one-third, because I blather a lot. … you treasure those times. You are so thankful for those times.” Ann Swinger, p. 87

Dedicated reader, writer, and traveler. Book reviewer https://WorldReader.wordpress.com France Travel https://FranceFootsteps.com Adventures in writing https://AdventureTravelWriter.org Pyrenees Pilgrimage is about walking across France alone through the Pyrenees Mountains. It is available in Kindle or print-on-demand. http://www.amazon.com/Pyrenees-Pilgrimage-Walking-Across-France/dp/1439267898
View all posts by patwa →
This entry was posted in Travel Knowledge and tagged field notes, how to write, nature writing. Bookmark the permalink.

This site uses Akismet to reduce spam. Learn how your comment data is processed.